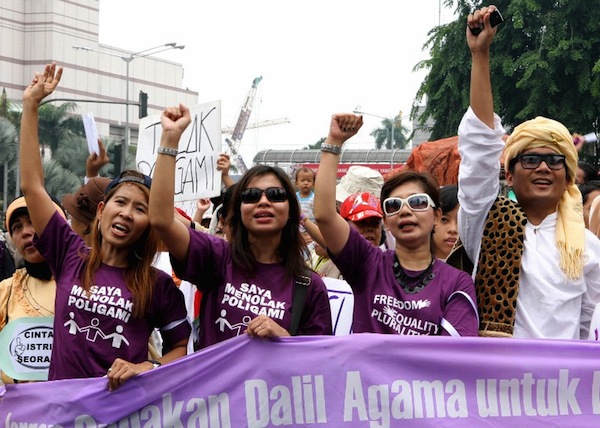 In this file photo, Indonesian protesters march during a demonstration against polygamy in Jakarta.

GARUT, Indonesia, Dec 5, 2012 (AFP) – Hundreds of Indonesians demanded Wednesday the dismissal of a district chief who divorced his teen wife via text message days after they married, alleging she lied about her virginity.

Around 300 protestors gathered outside the local government office in Garut, western Java, against Aceng Fikri, 40, who already had a wife when he married Fany Octora, now 18, as a second spouse. Polygamy is legal in Indonesia.

“Aceng Fikri must step down. He is an embarrassment to Garut,” a man at the protest shouted with hundreds cheering in support.

“Get rid of Aceng,” others yelled as 100 police stood on guard outside the building.

The case has outraged rights groups and the community in Garut, where critics of the leader have recently flung women’s underwear over posters of Fikri.

Fikri’s lawyer Ujang Suja’i Toujiri said the district chief admitted to demanding a divorce from Octora – who was 17 when they married in July – via text message four days after their wedding.

“Among his complaints was that Fany wasn’t a virgin as she said she was,” Toujiri told AFP.

Fikri also complained that he had spent 250 million rupiahs ($26,000) on their wedding and additional expenses to enroll her in a college, Toujiri said.

“Aceng has apologized. He is sorry to all Indonesians, especially to the people of Garut,” Toujiri said, adding that Fikri admitted to breaking up with Octora after feeling convinced she was not a virgin.

“It’s not ethical for someone like this to be a leader. He’s supposed to be a role model for the community,” Octora’s lawyer Dany Saliswijaya said.