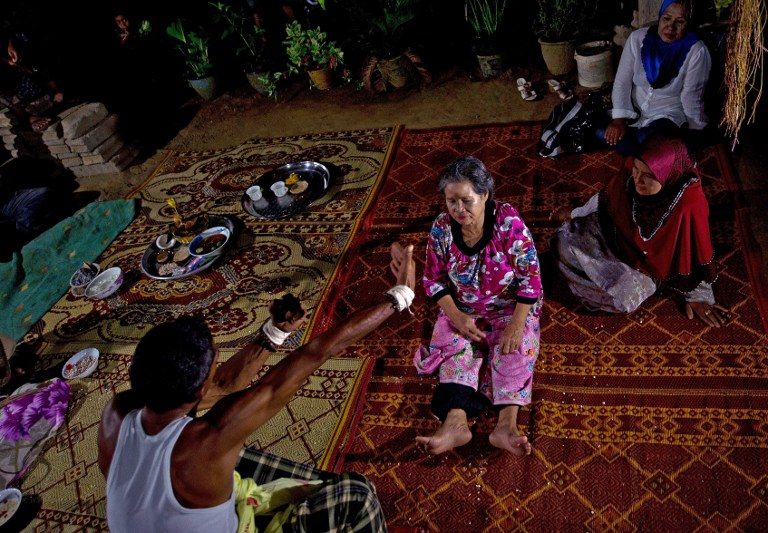 Malaysian shaman Zailani Che Moh (bottom left) in a state of trance performs “main Puteri” treatment on patient Che Esa (center right) at a village in Tanah Merah, outside the city of Kota Bharu. Found mainly in Malaysia’s Kelantan state and neighboring areas of southern Thailand — cradles of traditional Malay culture — the main Puteri is an animated healing spectacle that draws on a range of local cultural touchstones and legendary figures to “raise the spirits” of patients.

TANAH MERAH, August 5, 2014 (AFP) – Feeling dejected and drained, Che Esa consulted not a doctor but her local Malay shaman, who diagnosed repression of her “angin”, a metaphysical “wind” affecting spiritual and emotional health.

Her treatment, known as “the main Puteri”, included Che Esa tussling with two men, enduring pokes, taunts and even slaps from the shaman and, finally, a rousing Malay song and dance performed by about 50 fellow villagers.

“The past ten days it had gotten so bad I couldn’t get out of bed. After the main Puteri, I feel refreshed,” Che Esa said.

Found mainly in Malaysia’s Kelantan state and neighboring areas of southern Thailand, cradles of traditional Malay culture, the main Puteri is an animated healing spectacle that draws on a range of local cultural touchstones and legendary figures to “raise the spirits” of patients.

It has been driven nearly underground by authorities in the rapidly modernizing Muslim-majority country as a heathen relic of a pre-Islamic past.

But many Malays, the country’s majority group, see the main Puteri as a slice of their heritage increasingly needed in an emotionally challenging modern world and are working to revive it.

The main Puteri revolves around the belief that depression, chronic fatigue, and other emotional or psychological problems stem from disturbances in metaphysical forces.

“We raised her spirits again. She is like a commander or chieftain, who is hot-blooded,” shaman Zailani Che Moh, 48, said of Che Esa’s now-restored inner essence.

Her spirit is now said to watch over Kelantan and she is regularly invoked as the ultimate emotionally troubled main Puteri patient.

But conservative Islam has steadily gained sway in the historically moderate country, and religious bodies have issued edicts forbidding a range of animist spiritual practices as idolatrous.

Kelantan, in the largely rural Islamic heartland of peninsular Malaysia’s east coast, has gone even further since an Islamist party won state power in 1990, banning several traditions including main Puteri. Violators face up to a year in jail.

“In the main Puteri, there is the worship of other beings. In Islam, we only worship Allah,” said Nassuruddin Daud, Kelantan’s minister in charge of Islam.

Practitioners were driven underground or to other states, where sanitized versions are performed.

But pure main Puteri as a healing tradition is gradually re-emerging in Kelantan villages, a rebirth that authorities appear to be quietly tolerating so as not trigger a public backlash.

Sarong-clad shaman, or “tok Puteri” (“master of the princess”), diagnose patients with the help of a musician who plays a traditional Malay fiddle and acts as an interrogator as the holy man enters a trance-like state.

Shaman-like Zailani, called “snake man” for his contortions, twist and dance around, acting out a mix of legendary or traditional characters such as Puteri Saadong.

His tone veers from sorrow to mocking to aggressive as he scuffles with the patient before breaking into song, trying to find the approach that will “heal” a particular sufferer.

Some patients claim the ceremony magically restores their zest for life.

Most people seeking main Puteri healing today are said to be Muslim women who feel marginalized after losing their matriarchal influence to Islamic conservatism.

The banning of such centuries-old beliefs “was a shock,” and the main Puteri is today once again performed regularly in Kelantan villages, he said.

“Ironically, with all the stresses of the state, and laws and prescriptions, people need the tradition even more,” Khoo said.

The main Puteri does not clash with Islam but fills a vital mystical role that modern medicine cannot said Hasnah Mat Jusoh, 49, the matriarch of Che Esa’s village, herself a devout Muslim.

“If the patient goes to see a doctor, they won’t find an illness. Even the doctor will say ‘go to your village shaman’,” she said.

Adds Zailani: “Skin, muscle, sinew, blood, mucus, fat; those who are too fat, too big, have high blood pressure, or diabetes; those are under the doctor’s prerogative.”

But decades of pressure from certain conservative segments of the Muslim population have depleted the ranks of tok Puteri.

Zailani, whose father and grandfather were tok Puteri, said many aspiring shamans lack the patience or talent.

Pusaka is helping other shamans regain their footing and take on apprentices.

“I have shaman blood. You can’t copy it. This ability has to be innate in you and has to be there from the beginning,” Zailani said.

“It won’t go extinct, because there is no one who doesn’t have wind. Only shamans can find your wind.”