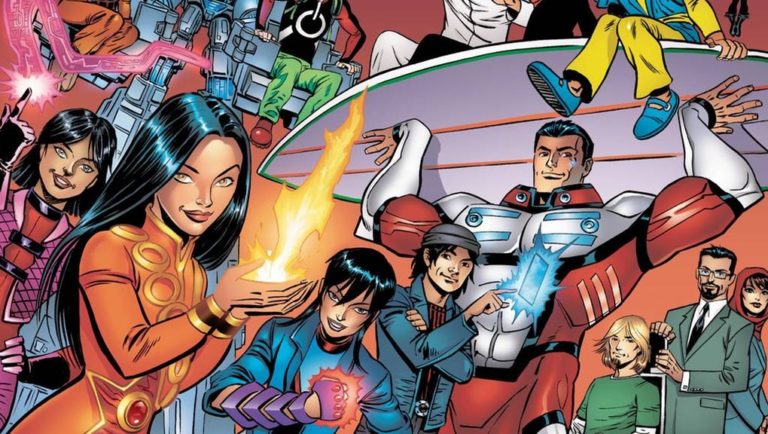 When Muslim women are portrayed in literature or film, they’re often presented in ways where they need to be ‘saved’, often lacking the agency to accomplish this on their own. Instead, there’s usually a savior around somewhere to save the day. These four superheroes represent a radical diversion from this – not only does she not need to be saved, but she is also the one doing the saving work for the world.

When Muslim women are portrayed in literature or film, they’re often presented in ways where they need to be ‘saved’, often lacking the agency to accomplish this on their own. Instead, there’s usually a savior around somewhere to save the day. These four superheroes represent a radical diversion from this – not only does she not need to be saved, but she is also the one doing the saving work for the world.

Kamala Khan was a Pakistani-American born in Jersey City after her parents moved from Karachi, Pakistan. Though respectful of her heritage, Kamala always felt different; she had nerdy interests, strict parents, and did not meet the white Eurocentric standards of beauty.

She was also a fan of superheroes, having devotedly followed the career of Carol Danvers, the former Ms. Marvel who had recently started going by the nom de guerre Captain Marvel.

One night, Kamala snuck out of her house against her parents’ wishes to attend a party on the Jersey Waterfront, only to be teased and ostracized by her classmates Zoe Zimmer and Josh. As Kamala walked home in anger and disappointment, Jersey City was suddenly enveloped in the Terrigen Mists, which had been released by the hand of the Inhuman king Black Bolt, and Kamala fell unconscious from exposure.

As her Terrigenesis began due to her Inhuman lineage, Kamala was presented with a vision of Carol Danvers chastising her for disobeying her parents and asking her what she wanted in life, to which she replied: “I want to be you.” Once the vision faded, Kamala woke up and broke out of her Terrigenesis cocoon wearing a replica of Danvers’ previous Ms. Marvel costume and literally transformed into Carol Danvers as part of her subconscious desire.

Shocked and scared at the sudden change, Kamala’s body repeatedly altered itself as her mind and body struggled to gain control over her newly-developed shapeshifting powers. When she saw Zoe fall into the river while trying to keep a drunken Josh off of her, however, Kamala (still in the Ms. Marvel form) instinctively came to her rescue by enlarging her hand to pull her out of the water. As Kamala returned home, she realized that merely looking like her idol was not what she wanted at all, but also that rescuing Zoe made her feel happy. After returning home, she was grounded by her angry parents, as her friend Bruno had told them that she escaped to the party.

Dust is an adolescent Sunni Muslim girl who possesses the mutant power to turn herself into a sand-like substance. Born in Afghanistan, she was rescued by Wolverine and Fantomex from a slave-trading ring. They had captured her after she was separated from her mother. She was sent to the Indian X-Corp base in Mumbai. Sooraya hid from the X-Men who were stationed there by turning into sand and spreading herself around the complex. Phoenix sensed Sooraya’s presence and telepathically convinced her to reveal herself to everyone present. Sooraya announced her presence by speaking a single word: “Dust.” 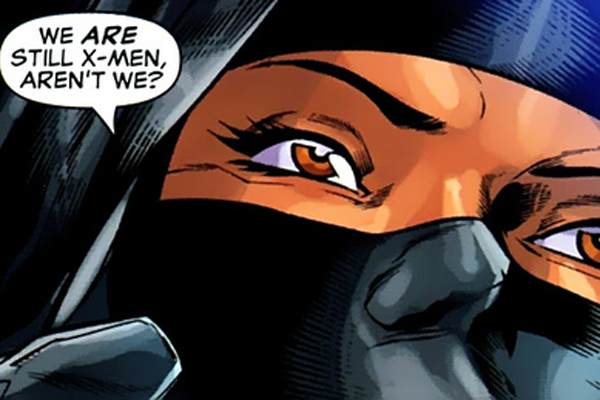 Ultimately, Dust was enrolled at the Xavier Institute in Westchester County, New York. Quiet and nervous, she experienced difficulty adapting to her new surroundings – particularly after being placed into Xorn’s Special Class, which at the time was becoming increasingly radicalized as Xorn prepared to usurp Xavier. Xorn attempted to indoctrinate Sooraya, but she resisted because he demanded that she renounce her faith and embrace his vision of a world dominated by mutants, which she refused to do. She attempted to alert Xavier about Xorn’s plans, but Xorn convinced the Professor that she was out of control, and thus Xavier used his powers to calm her enough so that she could be gathered into a jar. Even after being contained, the Professor could sense her panic, and shortly after, Xorn crippled him and began his destructive campaign to reverse the Earth’s magnetic poles. 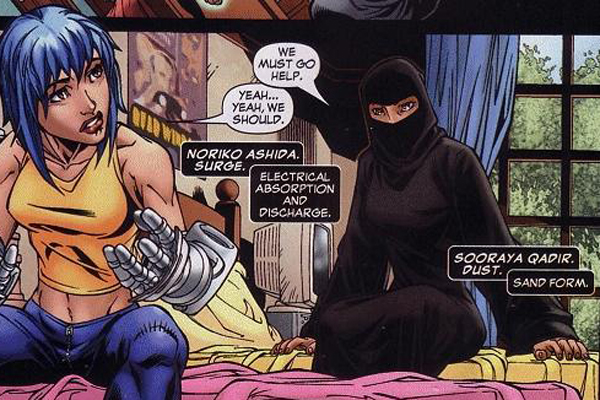 Sometime later, when the school was rebuilt, Sooraya was given the loud and rebellious Surge as a roommate. This turned out to be a disaster, as the two often came to disagreements over the traditional garb which Surge believed to be an affront to women’s rights. She was also made a member of the Hellions Training Squad, which seemed an odd choice given leader Julian Keller’s penchant for causing trouble. Her discomfort with questioning Keller’s authority, even as he prepared the Hellions for an attack against the FBI, further soured relations between her and Surge. By the time Hellions and the New Mutants battled each other outside Salem Central Station, Surge despised her roommate so badly that Wind Dancer blew Sooraya in her granular form all the way back to campus to prevent Surge from hurting her. This had the unfortunate effect that Sooraya ended up naked when she materialized back at the Academy. Seeing how badly she had humiliated her roommate, Noriko resolved to at least tolerate her till the end of the term. Meanwhile, despite her discomfort around others, Sooraya forged a friendship with Icarus. He asked her to the school dance, but she declined since the idea of the dance made her uncomfortable but he was not insulted. 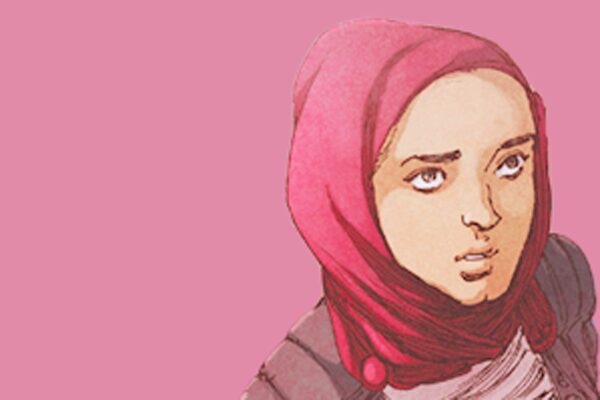 Nakia Bahadir is a high school student at Coles Academic High School in Jersey City and is close friends with Kamala Khan. Nakia comes from a Turkish family[1] and belongs to the same mosque as Kamala and her family. Growing up Nakia went by the more familiar epithet “Niki”, but recently she has become more devoutly Muslim and doesn’t want the “Amreeki” nickname anymore.

Doctor Faiza Hussain was working triage in London during the Skrull Invasion, doing her best to keep people alive in the middle of the conflict. Her base of operations was attacked by a Skrull war machine, but Dane Whitman, the Black Knight, intervened, killing the war machine’s pilot, and sending the machine itself crashing to the ground. 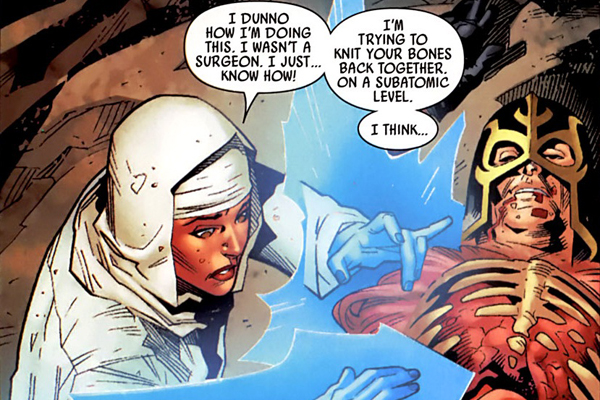 Dane scouted the area to see if there were any survivors and then brought Faiza along to check them out. While they were checking on survivors near the downed war machine, one of its devices came to life, blasting Faiza and knocking her out cold.

While Faiza was unconscious, she dreamed of King Arthur’s fabled sword, Excalibur. When Dane returned to check on her, having got the survivors to safety, Faiza came round. Panicked at the figure looming over her, she accidentally triggered her powers for the first time, turning Dane into a living cross-section. Faiza quickly pulled herself together and figured out how to revoke her power, returning Dane to normal. 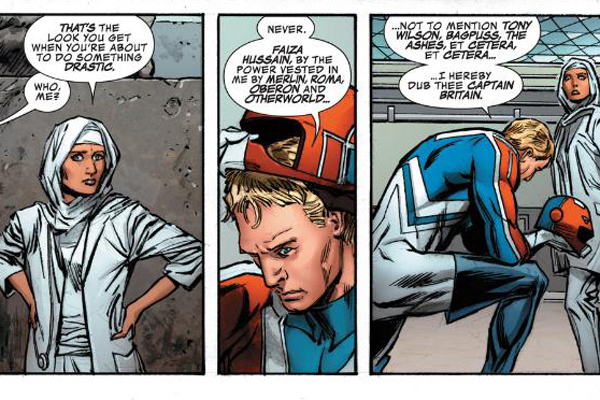 Moments later, Faiza and Dane were attacked by further Skrull troops. Dane killed a number of Skrulls, but Faiza ended the battle using another new power, the ability to immobilize other people, to paralyze the rest.

After Captain Britain resurrected and defeated the Skrulls using Excalibur, Faiza took the sword in the rock where Captain Britain left it after his victory and became the new master of Excalibur.