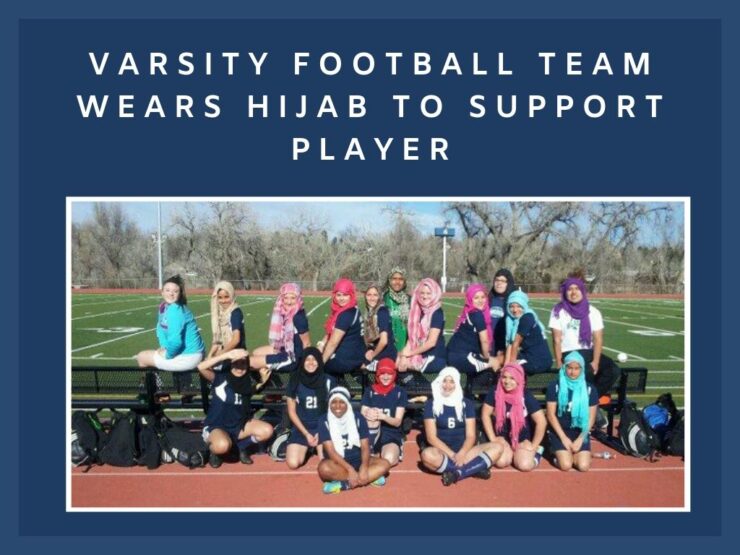 A high school girls’ football team from Denver, Colorado shows the world the meaning of team spirit. Afia R Fitriati has the story.

Sometimes a small act of kindness goes a long way.

Samah Aidah is a varsity football player for Overland High School in Denver, Colorado. Her school team hasn’t been performing too well lately, having lost a number of matches with other local varsity teams.

But when Samah was not allowed to play because of her hijab, her teammates showed her – and the world – what team spirit is all about.

On March 14, Divine Davis, one of Samah’s teammates, posted a picture of the Overland girls’ football team on Twitter. The girls were all smiling in their dark blue uniforms but something was strikingly different about their appearance: they were all wearing scarves wrapped around their heads, just like Samah who was standing in the middle. With the picture came the following tweet:

The refs wouldn’t let Samah play with her hijab so today we all wore one for the game #lovemyteam #letsamahplay.

Much to Divine’s surprise the tweet immediately went viral and elicited a wave of positive responses from across the globe. Positive comments in social media circles saluted Divine and her team for their act of solidarity. Twitter user @KiranMK0822 tweeted, “Thanks for standing up for what’s right! And thanks from a hijabi who plays badminton with the hijab on!”

Divine, reached through her Twitter account, explained the background story behind the photograph. “Wednesday March 12 was our first game. That was when the referee said [Samah] couldn’t play due to her hijab, which they said was dangerous.”

Samah was banned from playing despite a recent ruling by football’s world governing body FIFA that authorises the wearing of head covers for religious purposes during matches.

“The next day, we all wore the hijabs. We took this picture before the game and Samah was able to play,” Divine said. She decided to post the picture on Twitter simply because she wanted to “show my Twitter friends what [they] did.”

She added, “I think it is okay for girls to play sports in their hijabs and they should not be questioned or restricted from playing. No matter what sports.”

Even though the Overland Trailblazers eventually didn’t win the match, they won the hearts of many. Twitter user @GaelynCrowder, a member of a rival team that recently beat the team tweeted, “We played @DivineDavis(Overland) last week, the refs wouldn’t let a girl play due to her hijab, and her tweet about equality is everywhere.”

“From Fairview High School to you guys, much respect. You guys have a lot of class, great character. Way to stand for what’s right.”

Meanwhile, Divine was quite taken aback by the overwhelming response to her tweet. “I think it’s crazy how my tweet went viral,” she said. “I didn’t expect this many people to see it.”