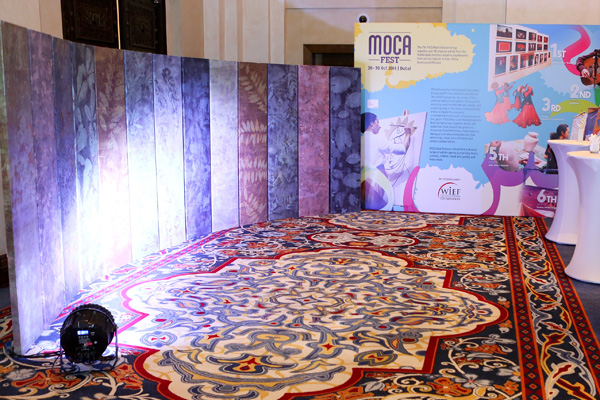 The power of creative industries to enable economic empowerment and social enterprise was highlighted in Dubai last year when it hosted the 7th edition of MOCAfest (Marketplace of Creative Arts) at the Madinat Jumeirah from October 28 to 30, 2014.

For the second year running, MOCAfellows – the World Islamic Economic Forum Foundation (WIEF) art residency program for 15 selected emerging talents – was held as a prelude event from October 25 to 27.

The event in 2014 was organized jointly by WIEF and the Dubai Chamber of Commerce & Industry and in partnership with the Dubai Culture and Arts Authority. The 2014 theme was aptly positioned as ‘Bridging Business to the Arts’, with Islamic art and design forming the key initiatives. Once again, as with the previous six editions, the MOCAfest provided a platform for a wide range of disciplines that included arts, music, cinema, visual arts, literature, poetry, dance and many more.

Other important diciplines were calligraphy, photography, graphic design, fashion, live installations, film festivals, music and poetry recitations, visual arts exhibitions and workshops. Effectively, MOCAfest had effectively again, put the spotlight on the arts and culture and this time, with special focus on the Gulf region. More than a performance festival, MOCAfest also hosted networking sessions, master classes and artistic collaborations to explore the potential of the creative industries to drive socio-economic growth.

Sheikha Latifa bint Mohammed bin Rashid Al Maktoum, Vice Chairman of the Board of Directors Dubai Culture and Arts Authority, said, “Dubai has always placed the highest emphasis on promoting its rich cultural heritage, and has today successfully established its credentials as an international center for arts and culture.

“The MOCAfellows program in Dubai strongly supports the position of Dubai in the international cultural scene by bridging the gap between the creativity and commerce while providing a strong platform for local talent to strengthen their foothold in the pursuit of a creative profession as well as networking opportunities with international artists. The Dubai Culture and Arts Authority will extend our expertise in conducting various workshops as part of MOCAfellows.”

Recognizing that equipping young talents with business and professional skills is imperative to empowering the creative industry and growth, MOCAfest offered emerging artists an international platform to showcase via performances, dialogue sessions, masterclasses, and networking and career-building opportunities.

The Honourable Tun Musa Hitam, Chairman of the WIEF Foundation, added, “The MOCAfest and MOCAfellows program is as relevant as the mainstream discussions that will be held at the Forum. Creative industries have tremendous potential to positively impact social progress.

“By integrating arts and culture as a key part of the Forum, we are creating a unique platform for intercultural dialogue. This year, the MOCAfest will capture the gush of creativity and innovation in the Gulf region, and will bring together creative artists from the Middle East with their counterparts from various regions in Asia, Africa, America and Europe.”

The event flagged off with a visual arts exhibit and featured a live installation ‘Geometric Connections Art Mural’ by Iona Fournier-Tombs. In addition to visual arts from the opening day, the second day went on to feature Master Classes on film and documentary from the Muslim world. Topics covered ranged from funding avenues for the arts to panel discussions on fashion themes.

There was a further sense of cultural vibrancy as MOCA Translations – an interplay of music and poetry recitation – kicked into full gear. MOCA Soundscapes – an evening performance of fusion works accompanied by an Islamic Fashion showcase – completed the works for the second day.

Abdul Rahman Saif Al Ghurair, Chairman of Dubai Chamber, said with pride, “Dubai is today emerging as one of the global capitals for the creative industries. Led by the safe hub status of the city, the arts and culture sector has witnessed a phenomenal growth in recent years.

“The platforms offered by the city of Dubai for creative talent to flourish have further opened doors for new social enterprises that synthesize the creative and business world. The 7th MOCAfest, an integral part of the World Islamic Economic Forum, will serve as a window not only to the international talent it hosts but also the creative landscape of the United Arab Emirates and the Gulf region. It also draws on one of the key pillars of the Dubai Capital of Islamic Economy initiative to establish the city as the capital of Islamic art and design.”