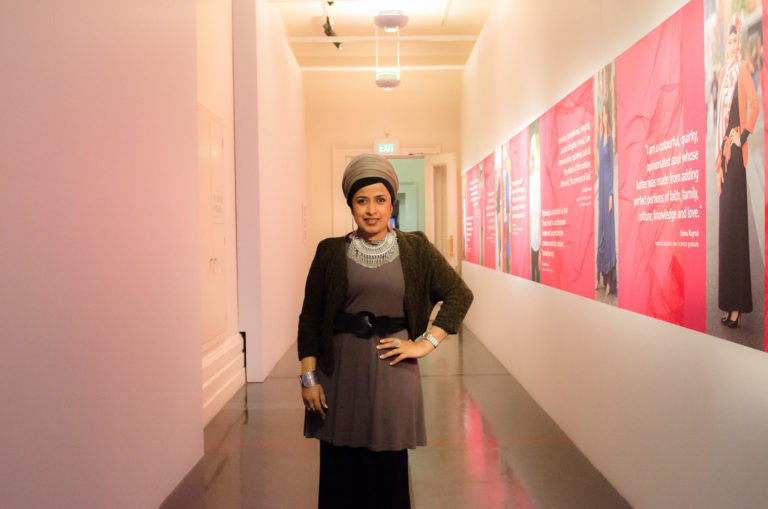 The Australian consultant with a hybrid upbringing believes that the arts are valuable channels of participation and communication across and within communities.

Of Indian descent, born in Kenya and raised in Australia, writer and consultant Tasneem Chopra know a thing or two about living across cultures. In 2014, she contributed an essay to the book Coming of Age: Growing up Muslim about diverse Australian childhoods. In running her cross-cultural consultancy she takes on a variety of roles, from emceeing at events and conducting 101 workshops on Islam, to curating a Muslimah fashion exhibit at the Immigration Museum in Melbourne.

For all her work combating stereotypes, it perhaps comes as no surprise that she was asked to speak at TEDx Melbourne in 2013 on that very topic. “Conversations are the antidote to stereotypes, so let’s have more of them,” she says. 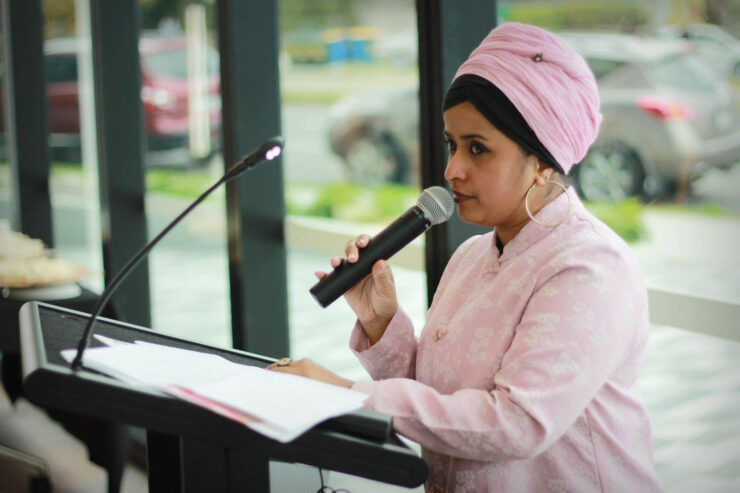 Tasneem will be moderating a panel discussion at this year’s MOCAfest, part of the 11th World Islamic Economic Forum held in Kuala Lumpur from November 3–5, 2015.

Aquila Style: You serve on the board of Lentil as Anything (LAA), a community restaurant in Melbourne that runs on a ‘pay as you feel’ concept. How does this concept guide cross-cultural understanding?

Tasneem Chopra: The premise underpinning the LAA ethos is that your monetary status should not determine your access to nutritious food. Universal access to food is a human right. As all Lentil foods are vegetarian and include vegan and gluten-free options, they are in effect accessible to all people. Further, the diverse ethnic backgrounds of chefs in the six restaurants across Melbourne ensure a repertoire of dishes from the Mediterranean, subcontinent and Americas, to name but a few.

The language of food is a borderless delight. There are Lentil projects in scope for Italy, New York and Ireland, emanating from contacts made by backpackers who once volunteered in Melbourne. This organic growth is living proof of the potential of a social enterprise idea resonating in any cultural context where equality and wellbeing are mutually aligned. 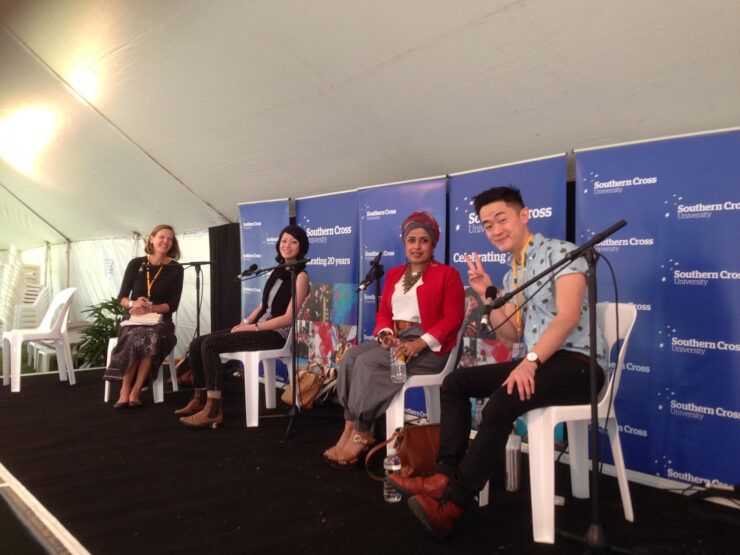 What were your first impressions of MOCAfest?

The scope of artistic disciplines is formidable – both in the breadth of mediums as well as the quality of individual talent. Aesthetically, I was overwhelmed by the stunning layout of [artistic] works. In this space, aesthetics are a critical issue, and I felt that MOCAfest succeeded in curating the space perfectly.

What do you hope to get out of MOCAfest?

Aside from the formidable networking opportunity with like-minded arts practitioners across the globe, I hope to be enriched from the caliber of artistic excellence. There is so much knowledge to be gained in the field of cross-cultural communication and I relish opportunities to augment what I know. Learning through listening is a time-honored skill.

This year, I’m also hoping there is a concerted crossover from the WIEF attendees into the MOCA space. The layout of the conference, logistics-wise, certainly lends itself to this being viable during the conference. The potential for art promotion and investment could be significant. 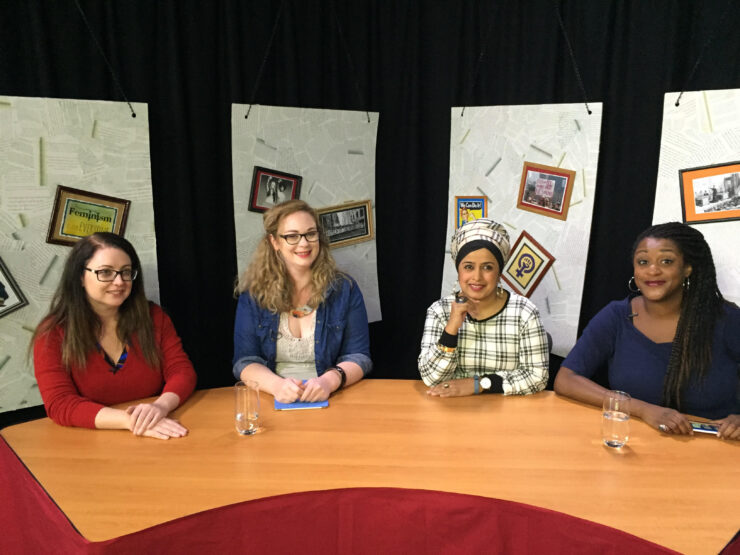 Other than the festival, what else do you plan to do in Malaysia while you’re in town?

This may sound shallow, but my initial response relates to satay sauce. I have a son with life-threatening allergies to peanuts, so my diet in Melbourne excludes most nuts as a matter of caution. As a result, when an opportunity presents itself to indulge my nut obsession with wild abandon, I do.

On a more meaningful note, I plan to network with arts entrepreneurs in the cross-cultural sector, of whom I have a few. I also hope to explore the modest fashion industry which is another personal and professional area of interest.

Tasneem’s TEDxMelbourne talk ‘Don’t Believe the Hype, Exceed it’ touches on issues of identity and sense of self. 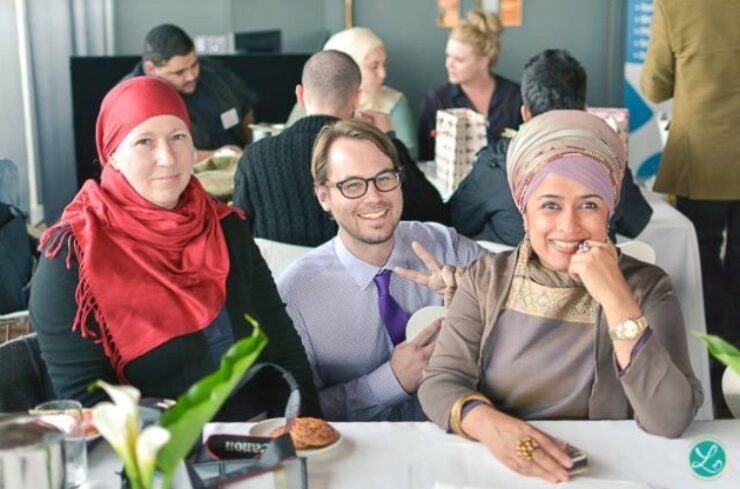 How do you think cross-cultural understanding can help dispel Islamophobia?

I’ve long argued that conversations are the antidote to stereotypes. Cross-cultural understanding demands a mindful effort in seeking to communicate your sense of self and wellbeing. It further necessitates that you consciously hear the other. This simplistic skill set of listening and learning cannot be underestimated as a tool for generating understanding.

If we desire genuine communication, we must progress from tolerance to understanding. Therefore, if we understand that the brunt of Islamophobia is borne of fear, and that fear is borne of no exposure or interactions with Muslims, then only genuine engagement can counter that.

The Muslim diaspora needs to reach out and participate in their societies, forging ties within their community to at least establish a platform for dialogue. I believe that the arts – poetry, writing, comedy and film – are also excellent mediums Muslims can deploy to convey authentic narratives. These mediums can also effectively reach target audiences en masse. 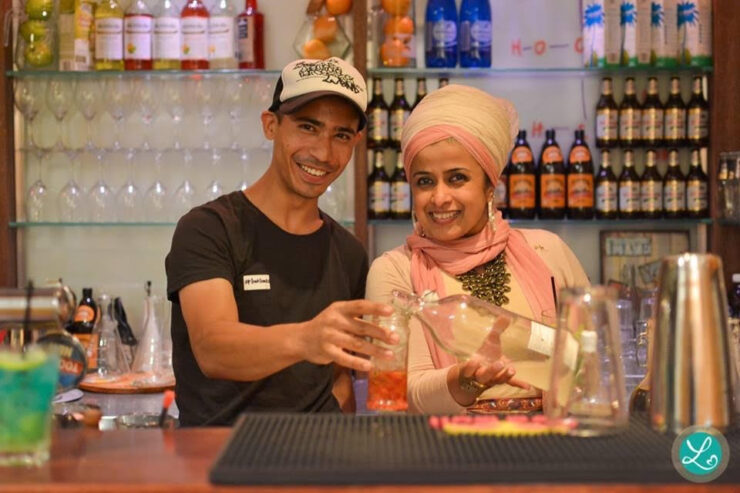 What are some of the ways that Muslim people of color can balance preserving their own identity with dealing with Islamophobia?

We can protect our identity by understanding that as Muslims we have no obligation to apologize for atrocities which blatantly fall outside the parameters of Islam. In owning our identity and proclaiming the peaceful intent of Islam, we live the example of all that is antithetical to Islamophobes.

Further, Islamic principles of human rights are aligned with universal human rights of equality, justice and protection. There is no conflict here.

A lot of your work relates to dispelling stereotypes about Muslims, Muslim women and immigrants of color. How do you think your lived experiences can contribute to this year’s MOCAfest theme of ‘Preservation of Identity’?

When conveying the experiences of living as a woman of color, I can speak authentically about a topic which is too often appropriated by the mainstream media in fulfilling their own agenda. Lived experiences need to be authentically conveyed by those who have lived them, particularly as a Muslim woman in the West.

There are few things more frustrating in this space than to be constantly spoken about and never spoken to. I have always lived the mantra ‘Own your narrative before someone else owns it for you!’

Simply put, write your stories. Tell them. Document them. Archive them. Own them. 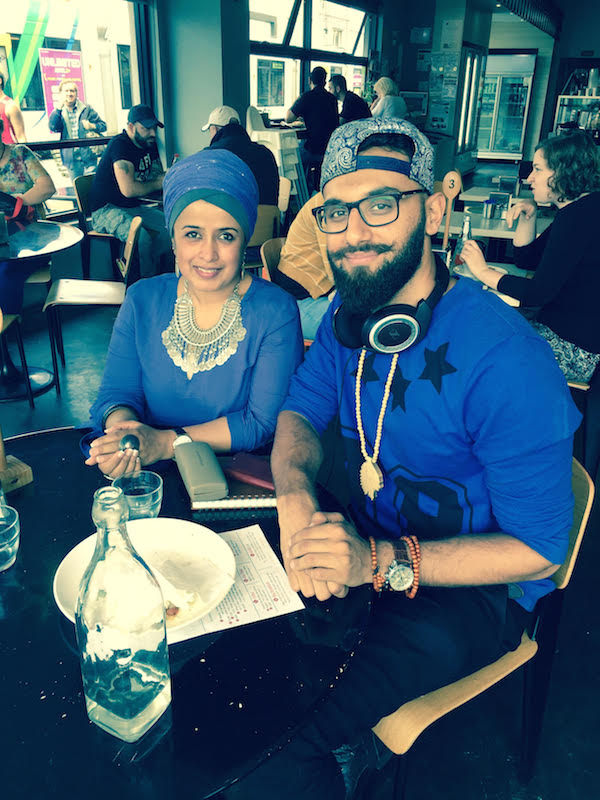