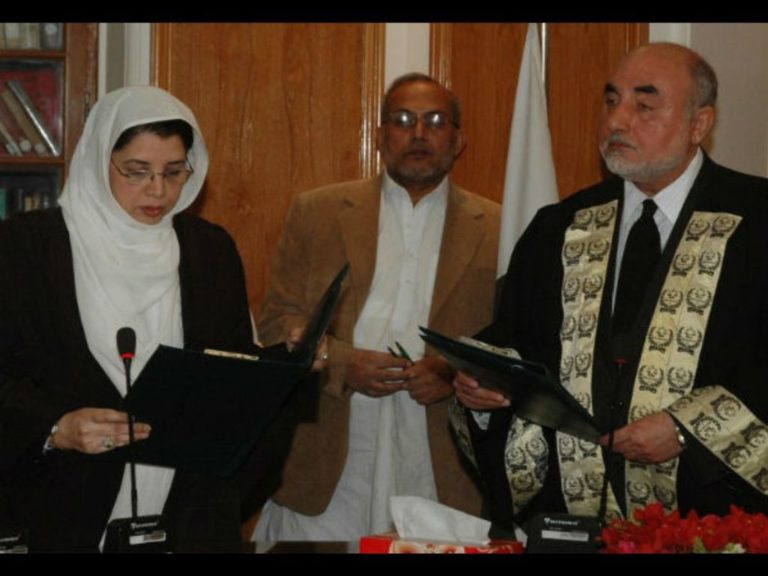 Pakistan Federal Shariat Court Chief Justice, Justice Agha Rafiq Ahmed (R), receives an oath from Justice Ashraf Jehan (L) as she becomes a judge at the sharia court in Karachi on December 30, 2013. Pakistan’s national sharia court, which hears cases under the country’s Islamic legislation, appointed a female judge for the first time in its 33-year history.

KARACHI, December 30, 2013 (AFP) – Pakistan’s national sharia court, which hears cases under the country’s Islamic legislation, on Monday appointed a female judge for the first time in its 33-year history.

Ashraf Jehan, 56, who was serving as an additional judge at the high court in southern Sindh province, made history as she took the oath in Karachi.

“It was a historic oath-taking ceremony today when an able lady judge had joined the Shariat Court,” Agha Rafiq Ahmed, the chief justice of the Federal Shariat Court of Pakistan, told AFP.

The court was established in 1980 during the rule of military dictator Ziaul Haq as part of a sweeping Islamisation of Pakistan’s institutions.

It examines the country’s laws to check them for conformity with Islamic injunctions and hears appeals under religious legislation known as the “Hudood Laws”, which run parallel to the penal code.

“There was no bar in the constitution to make a woman the judge of Shariat Court and there is no discrimination between men and women,” Ahmed said.

The chief justice of the Shariat Court, who rarely speaks to the media, said he was pleased to comment on a historic moment.

“I took the initiative as it would send the message in the world that we are enlightened people and would dispel many misconceptions,” he said.