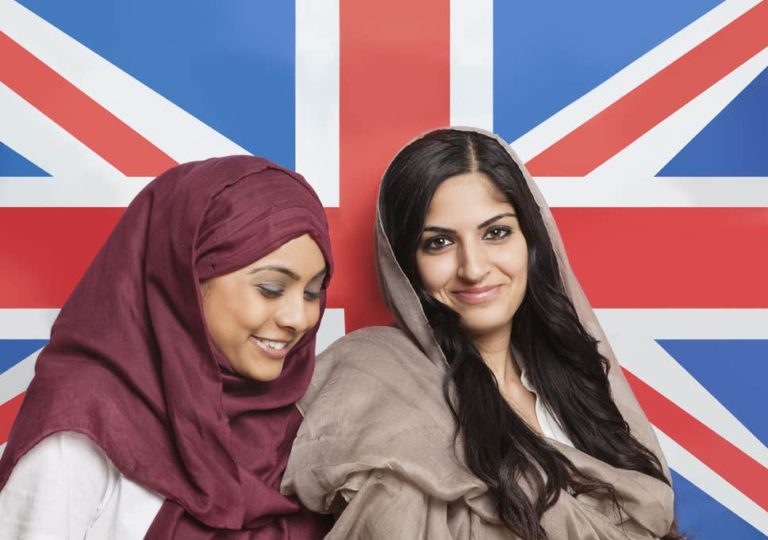 The “Happy British Muslims” video to Pharrell’s hit is trending, but Elest Ali explains why it’s not just harmless fun.

If you’ve been plugged into social media lately, you’d know about the video-meme phenomenon for that Pharrell Williams “Happy” track, which spawned a new viral: the one with the very enthusiastic Muslims in it. Brought to us by an anonymous group which call themselves The Honesty Policy, and who reiterate their anonymity with naive self-importance, the video has caused some controversy over the past week.

Before we address this at some length, I’d like to play the word association game with you. I say “black”, you say “white”. I say “ball”, you say “throw”. I say “Muslim, and if you were a non-Muslim with little to go on but negative media input, you might be inclined to say “terrorist”, “religious fundamentalism” or “female oppression”.

Let’s face it, in the wider Western world, Muslims have garnered the kind of bogeyman reputation once attributed to the long-persecuted Jewish people. We can blame it on a handful of nutters who have spoiled a good thing for the rest of us, or we can believe there’s a greater agenda at work – an agenda which dwells on differences and panders fear in order to divide and distract us from the real issues our world is facing.

Whatever your stance, the reality is that Muslims today are a marginalized and misrepresented bunch. The scapegoat people of near history. Lucky for us we weren’t around when Jesus was betrayed.

I once had the pleasure of being introduced by one non-Muslim friend (bless him) to another thus: “This is Elest. She’s Muslim, but she’s cool.” To my further mortification, my previous boss (also not Muslim) used to tell me with some fraternal fondness that I was the worst Muslim he’d ever known. Both incidents had me brooding darkly over what I’d done right/wrong to deserve such a distinction.

I come from a family that is divided over faith. My father, though Muslim, is not practicing and has his hang-ups about religion. Still, he respects my beliefs and lifestyle and is more supportive than other relations who are openly critical of everything from my hijab to my alcohol abstention. 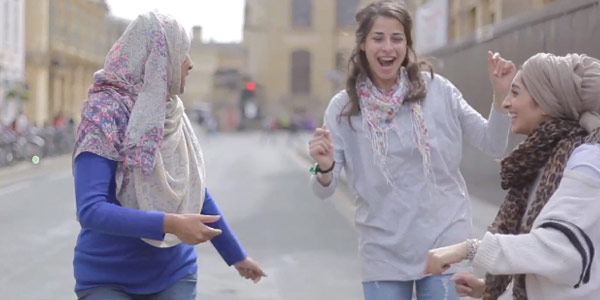 Conditioned to deal with prejudice from a young age, a lot of my life has involved going that extra distance to bridge the gap and make my “Muslimness” more accessible. I believe we should all make the effort to dispel ignorance and topple misconceptions. Yet in the spirit of dispelling ignorance, there have been instances in the past where I’ve crossed the line, so to speak. Looking back, I regret that I was compromising my beliefs for people who probably wouldn’t have even appreciated the effort.

As someone with a track record then for idiocy, I wouldn’t dream of taking the moral high ground. But as someone with said track-record, I can recognize the desire to be accepted as well as the sell-out when I see it.

If you haven’t seen it already, the “Happy British Muslims” video features a handful of British Muslim men, women and children dancing and clapping along to Pharrell’s hit single. It’s no surprise the haram police flared up when it first went on YouTube, swiftly followed by the new Muslim liberal-extremists who accused them of being killjoys. Amidst all the hissing and spitting, out came the racists – right when we were at each other’s throats airing our proverbial dirty laundry in public.

National newspapers like The Independent picked up on the story and did a piece about how Islamic fundamentalists were bashing a bit of harmless fun[i]. Not surprisingly, the right-wing section of the paper’s readership began spewing Muslim hate comments. It seems that happy Muslims make quite a few people unhappy. Yet what of the positive response? There has been some, we’ll give Honesty Policy that, but the most prominent reaction seems to be one of embarrassed irritation.

“It’s a bit strange watching that video,” said M Mohsin, a Londoner and a generally cheerful young Muslimah who doesn’t wear hijab. “Moderate” and “progressive” are the labels they’d slap on Miss Mohsin, if the pigeonholers had their way. “I felt embarrassed for the people in it, it was kinda like seeing your parents dance!” Another racist comment from The Independent that springs to mind comes from Andy267: “How very sad and insecure these people must be.”

”It’s one thing making Islam accessible, but something totally different to change it into a version that has elements of totally unIslamic stuff, and divides Muslims so hugely,” said another UK Muslim, who wanted to be known only as Zahra. What has bothered her most about the video is that it’s caused so much dispute and disparity.

Let’s get one thing clear, Muslims know how to have fun regardless of which side of the music debate they’re on. Neither the music nor the dancing is an issue I want to raise here, because to each their own interpretation. Bopping to substandard R&B tracks is a thing many self-respecting folk (whether Muslim or not) might confess to with sheepish embarrassment. That stuff’s catchy, no one’s denying it. But to gloat about it under the banner of a marginalized religious community gives the impression of trying to compensate for something.

The issue I want to raise is, why buy into an aspect of pop culture that sends a message of brainless conformity, as opposed to positive contribution?

I use the term “brainless” deliberately because of what Pharrell has been associated with. I refer to his feature in Robin Thicke’s controversial single “You know you want it” which was banned in 20 student unions across the UK for its “rape-promoting content”.[ii] The same Pharrell who also produced the song’s video featuring Robin, rapper TI and himself alongside a handful of near-nude models being generally demeaned.

The question is, did The Honesty Policy not do their homework, or do they just not understand that as adherents to a faith which elevates women and condemns their objectification as sex objects, we should be more responsible about who and what we promote? What message does this give youngsters? Reading over the “Moral High grounds” article on their blog, which addresses the importance of holding Muslim scholars accountable for making callous misogynistic comments, one would think they’d be more sensitive.

“It’s probably most important to remain true to ourselves rather than adapt to an image we feel would be better accepted by others,” said M Sheikh, yet another London Muslim who was put off by the video. “Taken on a surface level it’s just a bit of fun. But I think it’s important to consider the wider and long-term effects of adopting this sort of approach.”

A few years back while still based in London, I had the occasion to happen upon a middle-aged Englishman, clad in a work suit with tie and shiny black shoes galore, sitting in lotus position on the garden wall of a residential home: he was meditating in a public space. The encounter inspired me and for the rest of that day, I took the opportunity to shut my own eyes in meditation on the commute to work or recite a dhikr under my breath when I wasn’t occupied with something else.

By default, rude people became tolerable, the rush hour crowds didn’t bother me, and there was a spring in my step which had me smiling and generally making more of an effort to help others. Looking back, I realize the irony in a white Buddhist inspiring a Muslim girl. And so effortlessly, just by being himself.

Human beings across the colour and culture spectrum have a great deal more in common than the differences we dwell on. Regardless of our beliefs or background, we all have the natural propensity to live truthfully and meaningfully. The struggle to achieve this today often involves having to raise ourselves above those elements of popular culture which encourage our baser instincts, limit our consciousness and diminish our human potential for good.

On their blog, The Honesty Policy says they want to “rethink the rulebook of religious expression”, for a community which is “eclectic, creative and competent”. I ask what is eclectic and creative about causing such a ruckus over selling out so cheap, and conforming to pop culture at its least tasteful?

And God, to such awful music.