A campaign encouraging tourists to follow local values and norms of dress brings attention to Islamophobia in the West. By Sya Taha.

Qatar has revived a modesty campaign dating from 2012, when it was known as “One of us” and originally started by a group of Qatari women.[i] Due to being relaunched on 20 June 2014 – just in time for Ramadan – as “Reflect your respect”, the campaign is targeting public spaces with flyers and a social media poster showing various dress choices.[ii] Four stick bodies represent clothing choices that are deemed unacceptably immodest for revealing shoulders, arms, legs below the knee, and (men’s) chest hair.

It’s part of a larger code of recommended etiquette when in Qatar. An advisory issued by the Doha airport advises that “Women should dress modestly, and men should not be shirtless in public. Public displays of affection and intimacy are strongly discouraged.” 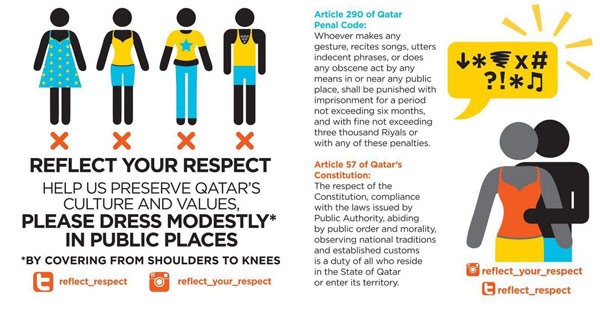 The symbolic representation of women and men is interesting enough for me to take a closer look. If the fourth figure with broader shoulders and chest hair is presumably a man, this makes women’s bodies the main focus of the dress code.
The basic requirement is for both sexes to cover up from shoulder to knee. Personally, I don’t think it’s too much to ask, considering that  Saudi Arabia requires all female tourists to wear the abaya and hijab. I think it’s perfectly reasonable for countries to issue a dress code for tourists in certain areas.
For example, most Buddhist temples in Thailand require shoulders to be covered. Borobudur, a major tourist attraction in Indonesia, now requires all tourists to cover their legs with a piece of cloth. Orthodox Russian churches also require female tourists to cover their hair, providing small scarves at the entrance – not unlike many mosques today.
Tweeter @RubyZubair notes that it’s a refreshing change from the constant demands from Western countries on Muslim women to not wear hijab or niqab.
However, her tweet reminds us that nothing happens in a vacuum. Things that happen in one country or region have an impact on others. Is this a grassroots campaign that aims to preserve Qatari culture, values and traditions just because it’s a noble goal, or is it a reaction against the growing numbers of migrant workers and tourists? Does it detract from other pressing issues in the country, like the high death rate of migrant workers due to unexplained illness?[iii]
This campaign is also a kind of reaction against the measures taken in the West in response to their fears of growing numbers of Muslim populations. Some people from countries like Belgium, France and the Netherlands, that spent the last half-decade or so discussing and implementing “burqa bans”, point out the hypocrisy of Muslims being able to enforce dress codes, while they can’t tell Muslim women what to wear. (News flash: dress codes have been in vogue for decades already, in the “East” as much as in the “West”.)
Is it a fair comparison? Does a Muslim woman have the same right to wear hijab as a non-Muslim woman does to wear the bikini? Should anyone be criminalized for transgressing dress codes? One could say that to truly support women’s freedom of choice, the answers to the above questions should be “yes”, “yes” and “no”. The following Tweeters clearly thought so, judging by their reactions to the Qatari campaign.
However, we should contextualize this issue against the background of Islamophobia in the West. This is very real and has resulted in mostly Muslim women being attacked on the streets and beaten up – sometimes tragically to death.[iv] There is even a hotline called Tell Mama in the UK for “recording Islamophobic crimes and incidents”. [v] Do tourists get attacked in the Middle East for covering up sufficiently? In the case of Qatar, they could get slapped with a fine or imprisonment. But there aren’t Qataris skulking in corners waiting to lynch them for exposing a shoulder.
Therein lies the most important difference: what are the penalties for not following the rules? Perhaps the most important thing we can be aware of is that no matter the country, initiatives to “maintain” national honor is often enforced at the expense of women. And that with all imposed dress codes, focusing on a campaign to promote “modesty” often deflects our attention from other more pressing issues in the country.
[i] ‘Backing ‘One of Us’ modesty campaign, QTA to post dress code guidelines in public spaces’, Doha News, 18 Nov 2012, available here
[ii] Victoria Scott, ‘Local modesty campaign ‘reflect your respect’ to relaunch in Qatar’, 20 May 2014, available here
[iii] Owen Gibson, ‘Qatar government admits almost 1,000 fatalities among migrants’, The Guardian, 14 May 2014, available here
[iv] Ava Vidal, ‘“People grab our veils, call us terrorists and want us dead”: What it’s really like to be a Muslim woman in Britain’, The Telegraph, 6 May 2014, available here
[v] Haroon Siddique, ‘Muslim women more likely to suffer Islamophobic attacks than men – study’, The Guardian, 20 Nov 2013, available here