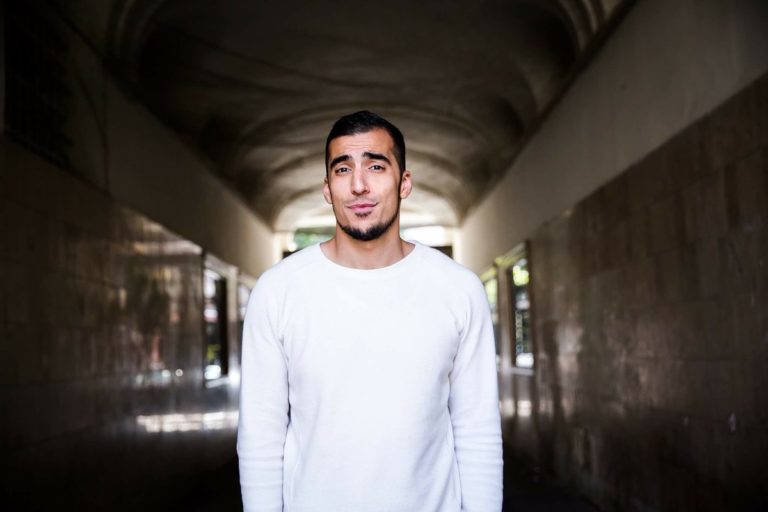 How one clever Muslim replaced a “beer challenge” with a wholesome, spiritual trend that has grown to attract big names from the online ummah. By Omar Shahid.

This year’s ALS ice bucket challenge went viral. Inviting the likes of Bill Clinton, Mark Zuckerburg and even George Bush to dump ice cold water on their heads, ALS raised over $100 million, making it the most popular viral charity trend. While it seems to have quietened down, there is a new challenge that is rapidly starting to take flight. ‘

Issam Bayan, a Palestinian nashid artist from Germany, eagerly started the Qur’an challenge more than three weeks ago. It works in a similar way: you take part and then nominate others. It’s starting to spread like wildfire across the Muslim community, with participants ranging from Somalia to the US. But it wasn’t the ice bucket challenge that spurred this challenge, it was something else.

“It actually started with a beer challenge in Germany that took place last year,” says Issam. “Muslims were being nominated and some even took part.” The challenge was for Germans to drink a whole glass of beer in one go. Disenchanted with the challenge and want to make a “halal” version, Issam launched the Qur’an challenge, not knowing whether it would take off. “This is a better challenge,” Issam says. “It’s a way of connecting people and making da’wah because the Qur’an is magical.”

So far, notable Muslim YouTube celebrities such as Adam Saleh and Mohamed Zeyara have taken part. It’s obvious their involvement with the challenge has influenced the younger Muslim generation, and there have even been children as young as four who have – perhaps somewhat inadvertently – taken up the challenge.

Ismail Hussayn, a popular Islamic calligraphist from the UK who also took part, says: “I personally don’t do challenges like these as it’s not my thing, but this one was something which you can’t really say no to. You’re doing the challenge for a good cause to encourage people around us to read the Qur’an.”

The Qur’an challenge is one of the many growing trends set by Muslims who are creating their own versions of mainstream activities. Who could forget the series of Happy Muslim videos that kept popping up earlier this year? Indeed, right across the world, Muslims are now asserting themselves in new ways, to encourage and promote positivity and unity among themselves.

Issam, who has just recorded his second Qur’an recitation, has now challenged three huge Muslim stars: multi-platinum-winning nashid artist Maher Zain and YouTube personalities Fouseytubeand Karim Metwaly. If they accept the challenge, this might just grow into one of the biggest things Muslims have ever done online.

Will you be taking part? Now’s the time!