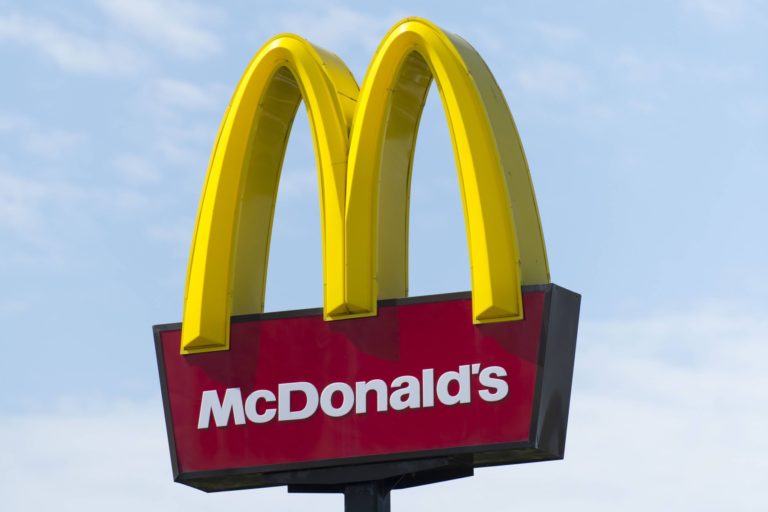 Sya Taha takes a look at relevant verses in the Qur’an to examine how permissible the fast food giant’s offerings really are.

I grew up in Singapore, where our minority Muslim community enjoys the benefits of the Islamic Religious Authority of Singapore (better known as MUIS), a semi-state institution that governs the collection and disbursement of zakat (social tax), and calculates times of prayer and important dates such as the start and end of Ramadan. Some of their tasks include ensuring that restaurants that serve halal food follow the required rules before being awarded certification, and allowing around green ‘halal’ sticker on food products that follow the rules of halal (MUIS guidelines on halal food in general and meat in particular).

This green sticker plays a major role in helping everyday Muslims select food. Many Muslims I know will feel ‘was-was’ (doubtful) about eating at a Chinese vegetarian restaurant not because some vegetarian ingredients could be non-halal, but because there is no green sticker since the restaurant did not apply for official certification.

This makes food selection much simpler when in Singapore. But in many other countries without such a certification mechanism, Muslims have to make their own choices and decisions based on their knowledge and conscience. Perhaps because of the familiarity and pervasiveness of fast food corporations, coupled with fears of the unknown, I know many who will seek out McDonald’s familiar golden arches when overseas. Muslims who do so might only eat French fries and a Filet-o-Fish, in trying to avoid non-halal meat. Meanwhile, they forget the variety of real food that could be cooked in perfectly acceptable ways: pasta, rice, potatoes, fish, vegetables, fruits, and so on.

But a green sticker does not necessarily embody halal, and McDonald’s is a prime example of this. 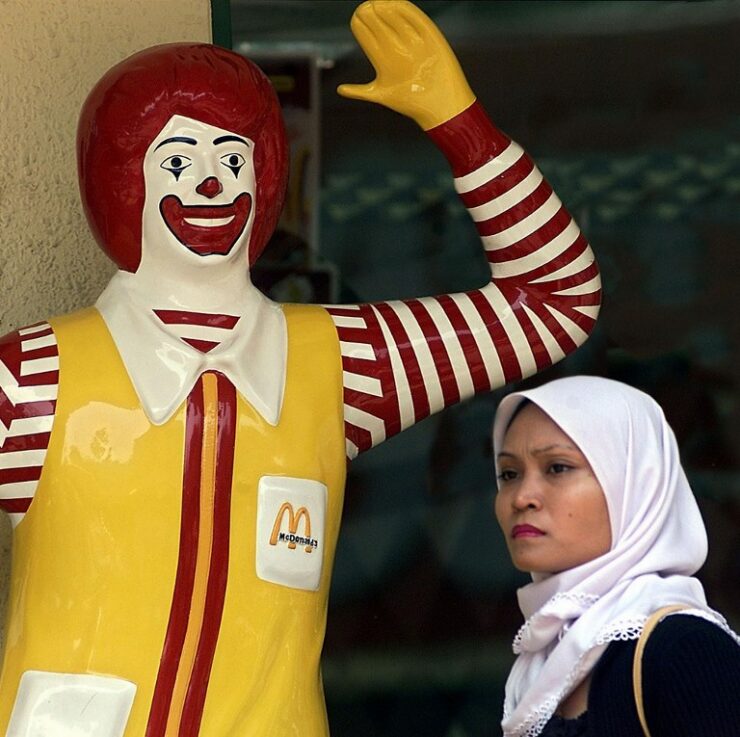 In the Qur’an, we are given examples of real food like fruits with ‘diverse tastes’ (eg olive, pomegranate) and meat (6:141). Together with another verse which also mentions food and drink (7:31), the concept of extravagance (tus’rifu) in eating is likened to the transgression of God’s laws.

This is because our body has certain divine laws: barring genetic diseases, eating well and exercising will result in health, and eating poorly and sitting around all day will result in diseases. Therefore, eating excessively or extravagantly is disobeying divine laws of physical wellbeing.

There are now laws in more and more countries that force McDonald’s to make their nutritional information available. Now there is no excuse to know that food from McDonald’s is high in saturated fat, salt and sugar. One medium serving of French fries make up almost a third of an average person’s daily fat allowance. And a 500ml cup of iced Milo is already a whopping 600 calories of pure sugar.

While many would eat entire meals at McDonald’s, it is possible to minimize the damage by limiting mealtimes at McDonald’s to one or two items at a time, and once every few weeks or months. I myself have not eaten at McDonald’s for more than three years.

In the Qur’an, halal simply means something that is permitted or lawful. When it comes to food and drink, the word toyyib, meaning good, clean, or pure, is used to describe what kinds of food are lawful (2:172, 20:81). In chapter Al-Maidah (meaning ‘The Table Spread with Food’), we are advised that whatever is toyyib is permitted and should not be made prohibited (5:5, 5:87). Therefore, food which is unclean, impure or bad in any way for our bodies and minds should not be on our to-eat list.

I want to specifically talk about the meats found in McDonald’s: its beef patties, chicken nuggets, and fried fish fillets. While ‘100% beef’ may sound healthy, it actually means that any part of the cow can be included – including tendons and muscle fiber, which are soaked in ammonium hydroxide before being churned and shaped.

Even though this beef is ‘halal’ slaughtered (with yet another certification), the requisite criteria is often ritualistic, only looking at the slaughter stage without consideration of how the animals were raised – which are sometimes curiously similar to non-halal meat production.

Chicken nuggets contain over 20 ingredients, including a range of chemicals and additives that we don’t even know for sure to be safe. Fish fillets may look like real fish, but in fact, they are made from a combination of cheap, overfished and tasteless whitefish. To make it taste better, more chemicals are added.

It’s encouraging to see that there are choices for McDonald’s consumers to add more lettuce, tomatoes, corn and other real food to their food choices. However, the meat on the menu is highly processed and tastes nothing like a cut of real meat or fish from the butcher or fishmonger. 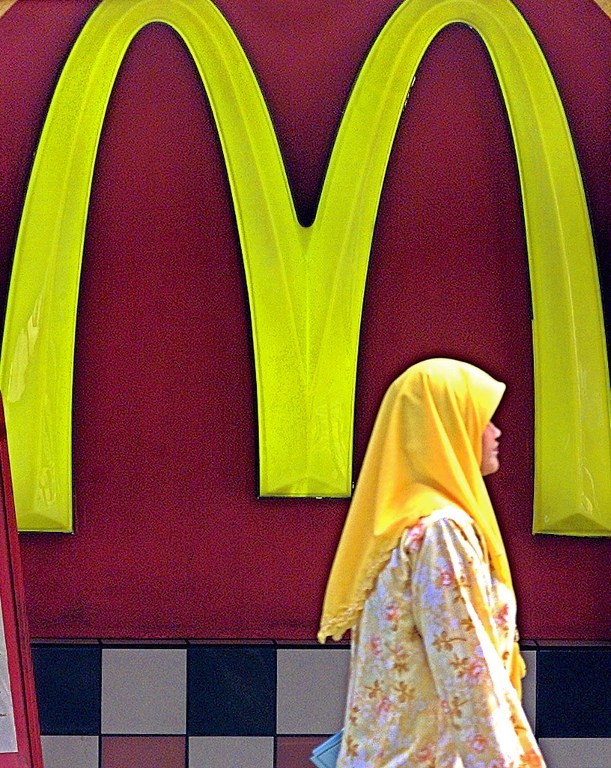 All of our actions have consequences, and the Qur’an encourages us to do good works (23:51) instead of committing abuse (2:60) or oppression (20:81) when eating or drinking. This indicates that the source of our food and drink is important – it must not cause pollution or destruction of natural habitats, and it must not be produced by underpaid or exploited workers.

An invisible aspect of McDonald’s business is its supply chain. When you buy a company’s product, you are voting for their actions, because you contribute to their profits. Several activist groups have popped up over the last decade that highlight problematic points of McDonald’s supply chain: beef from cows raised on former rainforest land in Brazil, and sugar, meat fillers, and oil made from industrial and subsidized monoculture corn from the United States.

Workers at McDonald’s are paid the lowest out of all fast food restaurants in Singapore, at $3.50 to $4.00 an hour. The preference for young workers discriminates against older workers while trapping young people into an underpaid job with no healthcare benefits. People get excited over ‘localized’ items such as the ‘Prosperity Burger’ aimed at Chinese New Year, perhaps forgetting that it discourages people from eating their healthier traditional foods.

The innocuous green halal sticker on almost every product including vegetables and soy milk encourages simple decision-making. It discourages us from making our own choices, rooted in knowledge and guided by our conscience and easy-to-follow Qur’anic principles.

Halal is not simply the absence of bacon and the presence of ritually-slaughtered meat. Disregarding situations of emergency, halal must encompass the concept of toyyib and the fair and ethical treatment of workers and the Earth.

For those inclined to read labels, ‘organic’, ‘fair trade’ or ‘sustainable’ are arguably more useful labels than the simple ‘halal’ sticker. We can make a start by choosing real food from our own traditional cultures that our grandparents can recognize, cooked by people, and eaten with gratitude.

This article was based on two blog posts by the author.