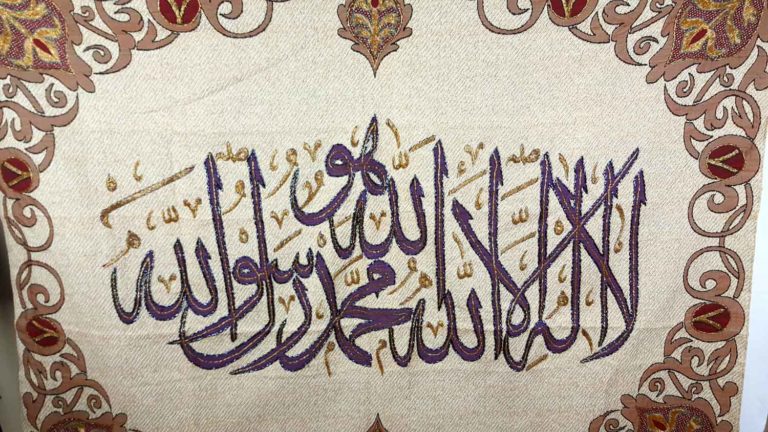 Embroidery was a very important art in the Medieval Islamic world. One of the most interesting accounts of embroidery were given by the 17th century Turkish traveler Evliya Çelebi, who called it the “craft of the two hands”. Because embroidery was a sign of high social status in Muslim societies, it became a hugely popular art.

In cities such as Damascus, Cairo and Istanbul, embroidery was visible on handkerchiefs, uniforms, flags, calligraphy, shoes, robes, tunics, horse trappings, slippers, sheaths, pouches, covers, and even on leather belts. Many craftsmen embroidered with gold and silver thread. A number of embroidery cottage industries, each employing over 800 people, grew to supply these items.

Below are exerpts from Asian Art Newspaper

A STORY OF Islamic Embroidery in Nomadic and Urban Traditions brings together more than 200 textiles from Islamic lands, including a wealth of embroideries from Central Asia. These types of textiles have never before been exhibited in the Gulf region. The exhibition aims to give visitors the chance to explore the exchange of trade and culture across the Silk Road and beyond.

These artefacts, with their kaleidoscope of motifs and colours, create a form of abstract art and testify to the role of Islamic women in creating an artistic tradition of great cultural significance as well as beauty. The works on view are embroidered garments and decorative objects that illustrate how the ancient skills and tradition of embroidery, carried on by urban, rural and nomadic women, sustained regional, tribal and family identities through its integration in communal activities, and how these skills evolved through encounters with different cultures, brought about by trade. The geographical area concerned in this exhibition reaches from Pakistan in the East to Morocco to the west, bringing together more than 200 textiles, including a wealth of embroideries from Central Asia, the hub of trade routes from ancient times. By tracing these routes and cultures through embroidery, the exhibition explores the exchange of trade and culture across the Silk Road. Silk Road trade brought great wealth to Central Asia, with textile production a major industry. Influences from other countries are also explored in the exhibition, for example, the Andalusians influenced textile-makers in Morocco, whilst the Ottomans influenced artists in Algeria, and all across Central Asia there was continual interchange among Mongols, Uzbeks, Pashtuns, Tajiks and Turkmen.

In order to make these historical and cultural links easier to grasp, the embroideries are ordered around two axes. The first is the organisation of embroideries by region and the communities where they were produced to see the way embroideries are informed and determined by their cultural setting. Social hierarchy in Central Asia was more fluid and consequently power more diffused, which meant that even sophisticated commercial textile processes involved input from craftsmen at different stages, making the process closer to a dialogue between craftsmen rather than a factory production. However, in Iran the Rasht embroideries displayed in the exhibition reveal a closely controlled production process with clear divisions of power and responsibility. The other axis follows the theme of embroidery in nomadic and urban settings. The pieces from these nomadic communities in Central Asia tend to be inspired by nature – alive with scorpions and rams – and the animals that were surrounding the tribes. Following a similar logic, urban textiles present the viewer with designs geared towards the more domesticated world of the city garden and beautiful floral patterns.

These urban embroideries also take us to Morocco where the symbioses of several external and internal influences have contributed to create patterns typical of urban Morocco whilst retaining the original imprint of Muslim Spain. Each textile is thus the result of the conflicting influence of Arabic art, known for its interlacing and interpenetrating patterns, and the rectilinear and vigorously geometric Berber art.

At the heart of Morocco’s vibrant handicraft culture is an essentially feminine art form of embroidery on silk, cotton, and linen-one of the most vibrant arts in North Africa for many centuries and in vogue through the 1930s. These exquisite embroidered objects bear witness to the sophisticated taste of a bygone society.

Moroccan Textile Embroidery explains how Moroccan women passed this cultural art on to the next generation and how embroidered patterns were used to decorate interior spaces-cushions, tablecloths, curtains and mats-as well as certain traditional accessories in the female wardrobe-shawls, belts, handkerchiefs, and headscarves.

Because of the rarity of older patterns and difficulty conserving textiles, Moroccan embroidery has remained largely undiscovered. Here for pattern artists and textile enthusiasts, is a rare photographic documentation of this beautiful ancestral art, including over one hundred historical pieces.

Get the Book HERE