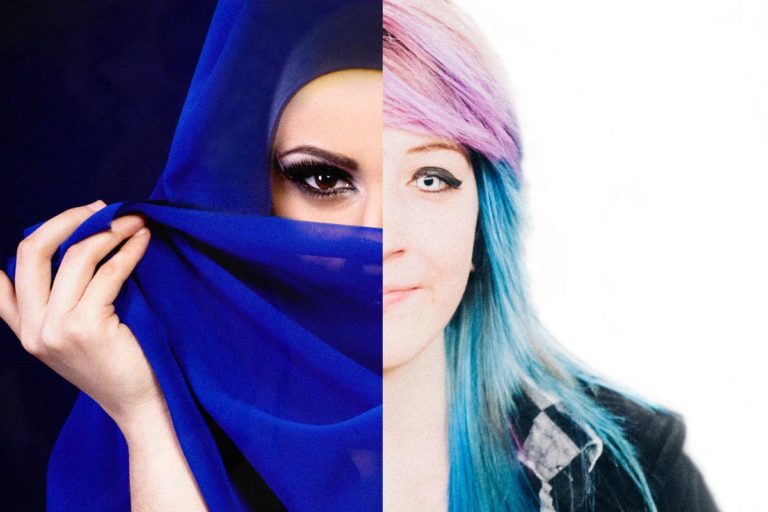 What’s under my headscarf matters to me, say Muslim women with alternative haircuts and fashion styles. Elest Ali is but one of them.

Whether or not you approve, the current fad of hijabi fashionistas and make-up tutorials seems here to stay. Yet with so much attention being given to the public facade, one wonders if there’s anything beneath it all worth leaving to the imagination. This isn’t to suggest that we shouldn’t look presentable or modestly attractive. It’s to ask that when the layers of makeup are scraped off and the veil is removed, do we end up looking like an anti-climactic, plucked pigeon?

But, my motto is: one should never underestimate the haircut of a girl in hijab. And I don’t just say that because I had a mohawk until last month. I got asked once, while struggling to put in a piece of tribal ear jewellery (it comprised a wooden shell and a bit of twig, see) why I bother when hardly anyone sees what’s under my headscarf.

“I do it for me,” was my response. That rings true for a lot of cool ladies I know who maintain an alternative sense of style that isn’t apparent to observers outside of the private sphere of their lives.

Founder and Editor of HairStraightenerLab.com, Mary Abraham said that “Hairstyle is your beauty; anyone can do that with Hijab or without Hijab.”

For the purpose of this article, I did a casual interview with one such lady and asked her the same question. Sarah Surname-withheld (London: Abu Dhabi) is a friend from back in my university days, and was the only other goth Muslim on campus while we were studying literature at King’s College. Throughout the years that I’ve known her, she’s mostly had pink or blue hair.

“I do things for myself and not for others,” she says. “I enjoy my style in the way any woman not wearing hijab does. It’s about making me happy and being true to myself. Requiring validation or approval from strangers has never been important to me, so I actually prefer my hair colours being hidden. No one asks this question to a person who has tattoos in discreet places, so I find it interesting that it’s so acceptable to question the hidden style choices of women in hijab.”

A classic rock chick with some vintage thrown in, Sarah is now a mother of two. Before she had kids, she used to wear copious amounts of black eyeliner, new rock boots and gothic Lolita coats. “Now when time is stretched and clothes inadvertently always get covered in children’s food, my main style items are black jeans, black Converse and my beloved armour rings.”

Another cool hijabi who inspired the thoughts which inspired this article is Asli Surname-withheld (Istanbul), that shy girl in headscarf who was the only one to raise her hand in English-language class one day when I asked if anyone had tattoos. You should have seen the heads turning. Brows furrowed as a dozen 20-year-old boys tried to reconcile the image of this demure young lady with that of a feisty vixen sporting ink.

Of course there was the odd, “But tattoos are haram!” comment. Asli had got hers before she knew this; before she became practising and chose to start wearing hijab. Underneath her cover of modesty she was still the funky hippy chick with flower crowns and bell bottoms. She showed me the tattoo, too – it was pretty awesome.

It’s a beautiful thing, that mystery and the moment of revelation

“The concept of an unadventurous, homogeneous girl in a headscarf is actually rather prevalent,” said Sarah when I asked her if people get flabbergasted when she de-veils as well. “I’m happy to challenge that. Usually people are surprised but fortunately it seems to be a pleasant surprise!”

I think this is generally the case. Non-Muslim male friends who aren’t aware of the etiquette of hijab have coyly asked me on occasion what I look like without the headscarf. “I imagine wild locks à la Arabian Princess” said one. My faux-enthusiastic response was, “I’ve got two ears too!”

That got a few laughs, but to me this sort of curiosity is harmless. You can try to imagine what a girl in hijab looks like without it, but more than likely you’ll fail and suffer a small (hopefully positive) shock when it comes off. I know I have –  and I am a woman in hijab. I’ve found myself gaping rudely at ladies who unveil in prayer rooms to do ablution, because from underneath the abaya someone stunning emerged. It’s a beautiful thing, that mystery and the moment of revelation.

It reminds me a bit of that controversial Diesel ad campaign from earlier this year. You’ll remember it featured a woman in a denim burqa with her heavily tattooed arm and waist exposed. Her daring gaze posing a challenge to pigeon-holers, the caption read “I’m not what I appear to be.” It was meant to provoke a reaction and it did. Women of all walks of religious adherence raged long and lyrical about everything that was wrong with the ad. 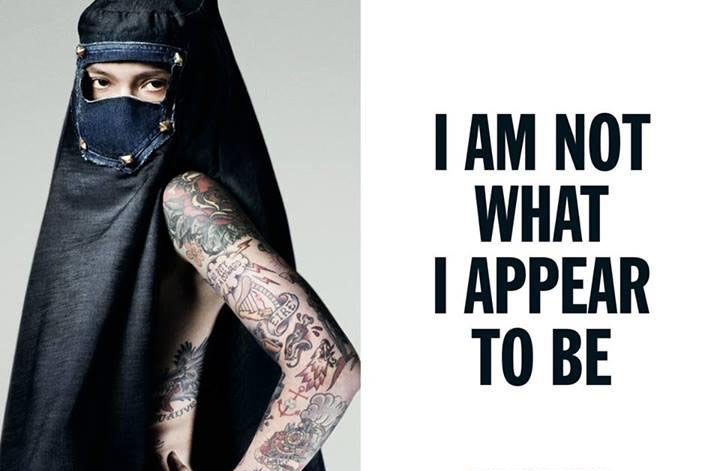 Despite my lack of respect for the people behind the campaign (Lady Gaga’s former designer, etc) and my aversion to the cultural appropriation involved, I wasn’t offended by it. (It made me roll my eyes, but I wasn’t seething with ire like when I found out about so-called “jilboobs”.) The ad is mildly titillating, yes, but more in the spirit of that strip of exposed skin under a Geisha’s neck paint.

If anything, it reminded me of that element of mystery which hijab maintains. Its function isn’t to mar a woman’s beauty or suppress her feminine sexuality, but to protect and preserve both. Muslim women aren’t nuns. We are multifaceted, exciting, beautiful, sensual females who have the confidence and intelligence to reserve our sexuality to where it’s relevant. In that vein, why shouldn’t we go all out simply because we want to? I say, indulge in the mystery and the beauty. Go mad. Be you without needing validation.

I asked Sarah, “What’s the wackiest hairstyle you’ve ever had?” She told me off because she doesn’t consider her hair wacky at all.

“The boldest it has been was when it was pink, purple and blue at the same time,” she said, adding, “Actually I cut my fringe wonky when I was five so that was probably pretty wacky!” I’ve been there. Little did my aforementioned inquisitive male friend know that at the time he asked, my hairstyle was as asymmetrical as his.

Now I’m wondering whether I should bleach this pixie cut white.